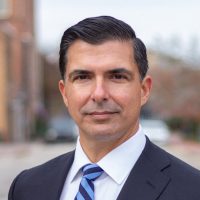 An expert executive coach, facilitator, and executive assessment specialist, Patrick has supported strategic leaders and their organizations around the world, and worked throughout manufacturing, financial services, transportation, healthcare, retail, hospitality, telecommunications, government, and nonprofit sectors. He is board-certified in coaching and in clinical psychology, has worked with high-performers from senior professional levels to the most senior executives, and has been coaching at the C-Suite level for over a decade.

Patrick was recruited into the world of executive coaching over 15 years ago due to his unusual experience as both a clinical psychologist and a Special Forces officer, or Green Beret. In addition to his work with TMCG, Patrick maintains an active affiliation with the top-ranked, Center for Creative Leadership (CCL), and travels widely for them as an executive coach working with leaders, at Corporate Director through C-Suite levels, from within organizations ranging from top Fortune 500 companies, to nonprofit corporations with assets in the billions. He also maintains an active security clearance which facilitates other work within the intelligence community, from operator through Senior Executive Service levels. Patrick grew up in New England, and attended Deerfield Academy in Deerfield, MA. He lives in North Carolina with his wife and three children.

Before entering the world of executive coaching, Patrick’s primary industry experiences were in the military as a Special Forces operator, and in healthcare as a clinical psychologist. Patrick joined the United States military after the terrorist attacks on September 11, 2001, and served for nearly a decade in infantry and special operations units. Patrick also assessed and coached other elite military special operators through work at the United States Army John F. Kennedy Special Warfare Center & School in Ft Bragg, NC.  Previously, he spent a decade in clinical psychology, including teaching positions at New York University, Cabrini Medical Center, and Bellevue Hospital Center.

Patrick’s comfort optimizing human performance in extreme situations, experience living and working in the Middle East, and familiarity with multiple languages, enrich his individual and team coaching across the public, private and nonprofit sectors with their increasing demand for global, culturally-astute change. Helping leaders identify and mitigate the risks of relative vulnerabilities is a particular area of specialization.

Patrick approaches both facilitation and teambuilding as relationships—often using proportional vulnerability as a way to build trust rapidly and authentically. From there, recognizing that every client is unique, he develops a customized approach and operational plan which guides the journey forward. Developing metrics, formal or informal, is another key step which generates indicators that help determine how and when to end the engagement including how client growth is sustained and development continues.