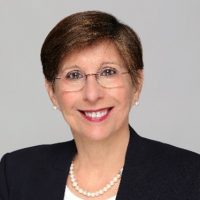 Rosa is a multilingual and multicultural Executive Coach, trainer and Clinical Psychologist who brings more than 30 years of expertise in human behavior. Her coaching approach is grounded in psychological training, adult development, neuropsychological research and expertise in behavioral change. She is fluent in Spanish, Hebrew and English and has coached hundreds of leaders globally from a variety of industries and leader levels. She is masterful in using assessments to support leaders and managers in gaining self-awareness and insight, providing solid grounding for developmental goals to flourish. She had led a multinational team and has trained individuals in North America, South America and Asia.

Rosa began her professional career as a Clinical Psychologist combining clinical practice with supervision of psychologists in training.  Rosa was the director of a clinical training program that became a highly competitive and well regarded training program by doctoral students.

Rosa transitioned to Executive Coaching and Leadership Development more than 20 years ago and was invited to be an Executive Coach and Adjunct Faculty at the Center for Creative Leadership (CCL®). At CCL she served as a coach and facilitator both nationally as well as internationally. Rosa has designed and delivered coaching skills programs for leaders to support organizations interested in building a coaching culture. In 2010 she was tasked with building a team of executive coaches in Latin-America to serve a large financial conglomerate in Lima, Peru where she also coached members of the Executive Team over a five year period.  From 2012 – 2020, Rosa was the Coaching Talent leader for CCL® at the San Diego campus, training and managing a team of over 140 Adjunct Coaches in Western North America and Latin America. Rosa became a Master Trainer for Paradigm Personality Labs since 2013 and has lead Workplace Big Five Profile™ certification workshops for coaches in North America, South America and Asia. Rosa is fondly known for her supervision skills, supporting and challenging coaches to increase self-awareness and sharpen their coaching skills. Rosa’s mission before retiring from CCL® was to increase the diversity of the coach cadre and she is proud to leave that legacy behind.

In addition to her work at CCL®, Rosa was the president of BGB Consulting, a San Diego consulting firm dedicated to leadership development and Executive Coaching. Being multilingual and having lived in three continents, has facilitated her effectiveness as a coach with leaders around the globe.

Rosa is also passionate about community and works pro- bono with MANA de San Diego, a non-profit organization, whose mission is to empower Latinas through education, leadership development, community service and advocacy. In 2018, Rosa was recognized for her work in the Latino community receiving the Distinguished Contribution to Psychology award.

Rosa’s coaching has involved working with leaders and managers in small, medium and large scale public, private and nonprofit clients. She has considerable experience coaching individuals who have a scientific, engineering and technical backgrounds as well as backgrounds in manufacturing, services industry, government, health care, biotech, high tech, utilities finance and pharmaceutical companies.

Rosa believes that coaching is a powerful avenue for growth and development. Described by her clients as direct yet compassionate, she tailors coaching conversations to the individuals’ goals and aspirations. She balances a genuine curiosity, which generates a trusting and safe space, with thought provoking questions to increase self-awareness. She engages in powerful conversations that challenge clients to step outside their comfort zone, try new behaviors and see new possibilities, accelerating mindset shifts and sustainable results. Rosa invites her clients to explore underlying beliefs that may be holding them back from unlocking their potentials and supports them in capitalizing on core strengths as they develop leadership practices with purpose and increased organizational effectiveness.

Rosa has designed and facilitated leadership development programs where skills and experiential learning are intertwined to integrate cognitive with heat experiences to increase self-awareness, insight and goal setting. Rosa has designed and delivered coaching skills programs to help managers and leaders learn core coaching skills. She has worked with teams to build trust, effective communication and practice effective feedback tools. She has also design teambuilding using personality preferences and needs (MBTI + FIRO-B) to help understand how personal preferences play out in teams and can improve communication and collaboration. Rosa is certified in the 4MAT for business design methodology, an approach that guides designs to take into account adult unique learning styles.